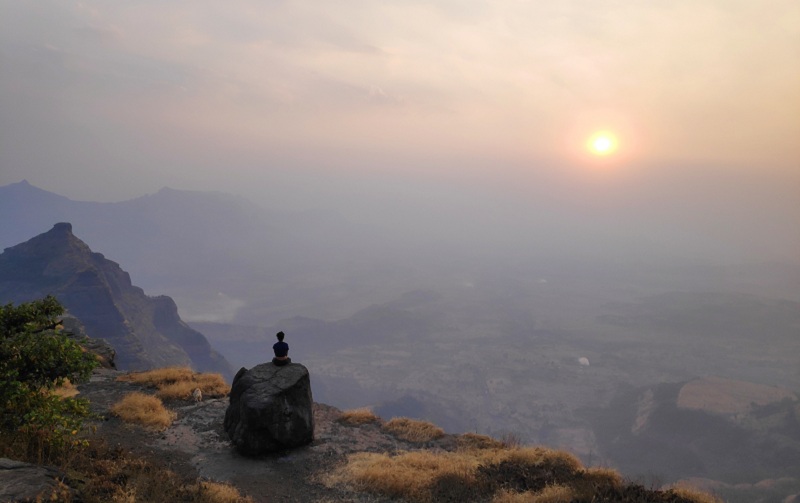 review us on
See All Reviews

Harishchandragad trek via Khireshwar is a medium difficulty grade trek in the Sahyadri – Igatpuri/Malshej region of Maharashtra, India. The highest point of the trek at 2625 ft (1422 m).

Visit this trek for its beautiful sunset, peaceful campsite, historical significance, and the possibility to bond deeply with the locals.

You Should Visit Harishchandragad if You..

Love Sunsets - The sunset that you will get to witness from Konkankada will be one of the more beautiful sunset you will ever see in your life. Konkankada is huge cliff that expanses over a few kilometres. There are no other tall mountains in front of this cliff for hundreds of kilometres to obstruct the view.

Love camping under the stars or in caves - Harishchandragad is a really popular hiking destinations for people from Mumbai and Pune and is always bustling with people. When you camp here, you get to meet and interact (efforts needed - tougher than climbing the mountain if you’re an introvert like me) with people from a huge variety of backgrounds.

Love to experience local culture: The family of Bhaskar and Nathuba, who serves and helps us with the accomodations is one of the sweetest locals that you will ever come across. “Aai” and “Nathuba”, the parents of Bhaskar, are a lovely bunch of people giving hugs and showering love to all the visitors. A lot of trekkers revisit this place just so they can meet the lovely locals again.

Love History - The Harishchandreshwar temple, the Kedareshwar cave, the Pushkarni, and the Ganesh caves are all some of the ancient structures dating back to the 1st century AD.

This route has got a great thrill element and is diverse in terms of the terrain. If you are a fit person traveling with a bunch of people who hike regularly, we highly recommend this route. 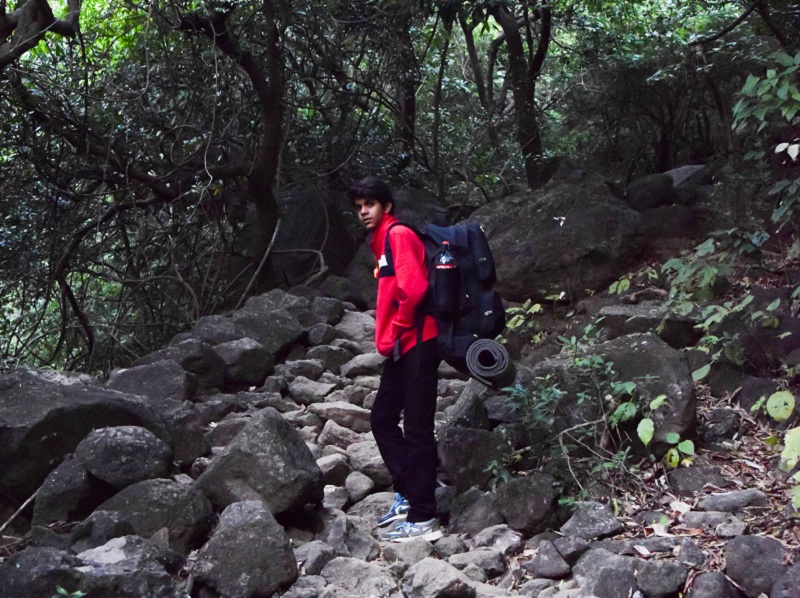 It begins with a 6 km long walk alongside a massive water body on a dirt road if you’re traveling by ST bus and get down at Khubi Phata. You can skip this walk by hopping onto a shared Jeep that runs between Khubi Phata and Khireshwar village. If not, the walk is really beautiful and you’ll enjoy it anyway. 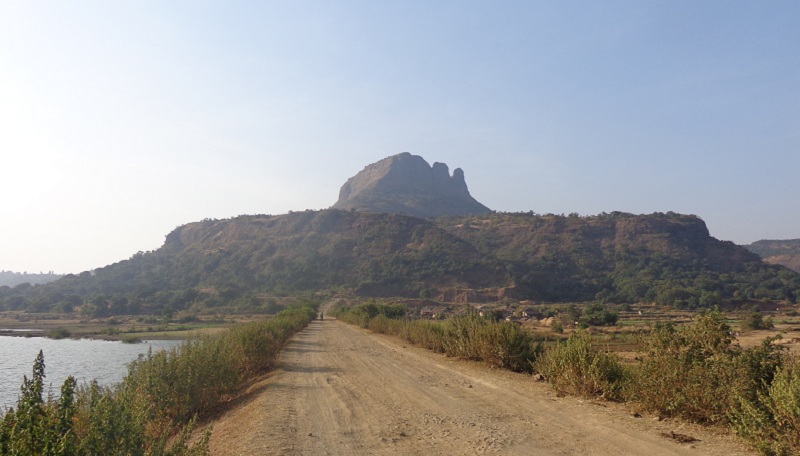 The trail begins from Khireshwar village where you pass through a plain patch of land. Once in, the ascend begins and it’s steep for most part until you reach the Tolar Khind. Crossing Tolar Khind is one of the trickiest parts of the route because you climb on a highly exposed rock patch that faces right into the valley. 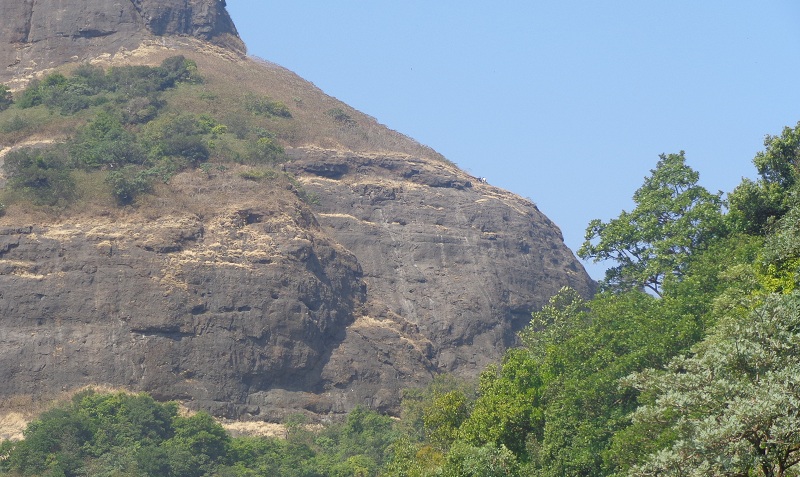 Once you have crossed the Tolar Khind, you’ll be ascending for another 20 minutes and reach a sunrise point. 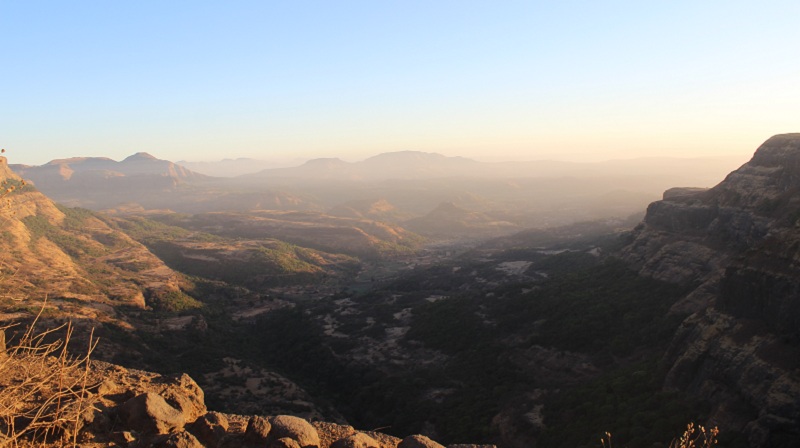 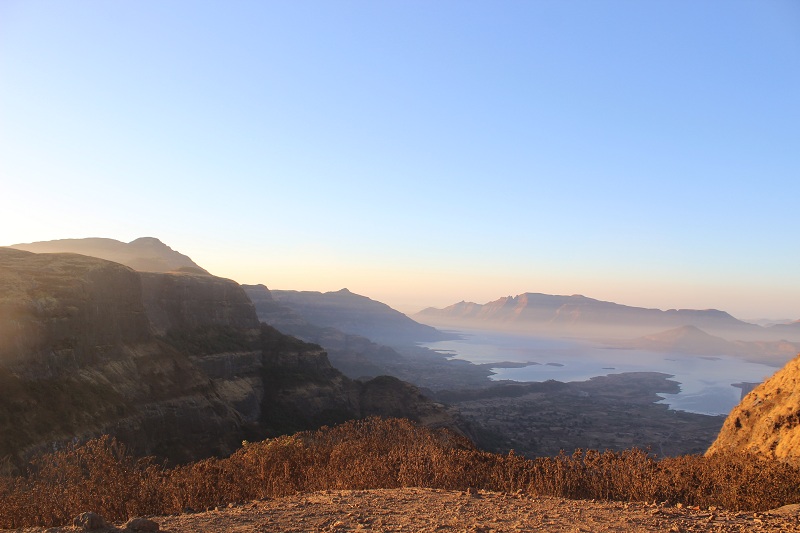 Beyond this, the “7 Hills” part will begin. Here, you’ll be crossing 7 tiny hills (climbing up and down these hills) which should take approximately 90 minutes to reach your destination. There are 2 options to cover this patch. One path is longer and exposed to sunlight but demands lesser ascending. Another path involves more climbing but is through a dense forest and comparatively shorter. Most people prefer the first path but if you are looking for a challenging (and faster) climb, you can choose the second path. Use our route to navigate through this path because there are high chances of getting lost on this path. 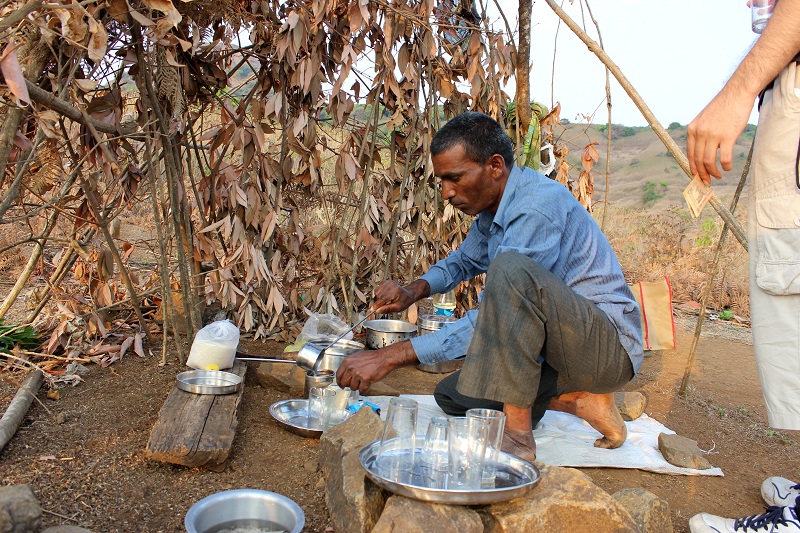 The base village, Khireswar, is a quiet village village amidst Malshej Ghat and is about 6 kms away from the highway.

If you’re travelling from Mumbai, you can take a local train till Kalyan railway station which is on the central line. From Kalyan, head over to the ST bus stand and hop on a bus going to “Nagar”. These buses are available every 30 minutes but make sure you ask the conductor if it stops at Khubi Phata (Sometimes, you might need to use your puppy face to convince them for agreeing to stop at Khubi Phata).

From Khireshwar, you can either walk for 6 kms or catch a shared Jeep if you’re lucky enough.

There are buses available for Khubi Phata from Pune as well but aren’t as frequent.

How to Reach Khireshwar with Private Transport:

Khireshwar is accessible by road. The last leg (Khubi Phata to Khireshwar) is a dirt road and is really bumpy. You can find a parking place with the help of a local.

Availability of Resources on the Top of Harishchandragad

Drinking water is available in the temple almost throughout the year.

Maggi, snacks, packed food and traditional Maharashtrian style home-cooked food available near the temple as well as at Konkankada.

You can stay in the caves near the temple during monsoons. Camping facility available throughout the year. (Villagers provide tents on rent) near the temple as well as on Konkankada.

Food and tents near the temple:

Food near the temple:

Food and tents at Konkankada:

Transport from Kasara to Pachnai:

Best Time to Visit Harishchandragad and Why

The best season to visit Harishchandragad is winters when you can comfortably camp at Konkankada and the route becomes much safer as compared to monsoons. The nights at the top will be really chilly which will call for a comfortable bonfire.

October is not as pleasant in terms of the weather but the entire fort is blooming in hue to golden colors with Sonki flowers and it is one beautiful sight to witness.

Monsoons aren’t the best time to visit Harishchandragad because

a) you can camp at Konkankada, and

b) all the routes become risky since they have a lot of exposure.

There’s no cover for at least 2 Kms. around Konkankada to hide if it rains heavily. Although camping is possible near the temple, the weather gets really bad sometimes and the route is prone to landslides.

In spite of all these challenges, if there is one reason to visit Harishchandragad during monsoons then it is “Indravajra”. Also known as Broken Spectre, Indravajra is a phenomenon when the Valley beneath Konkankada is filled with clouds (mist) and the sun is right behind you (likely to happen before 11 AM). At that point of time, if you are lucky enough, you can see your shadow falling on the mist and the top of your head has a circular Rainbow. This is a rare sight and trekkers spend days on the fort just so they can witness this once.

This is an ancient temple carved out of monolithic rock. Walking inside this temple will transfer you hundreds of years back into the past with its quiet, weathered, and ancient vibe. 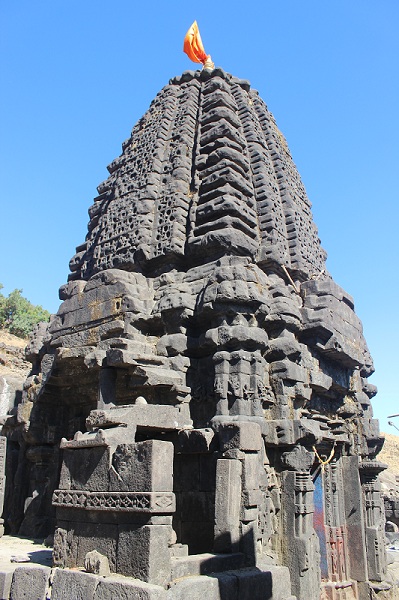 This caves has a 5 feet tall Shivling surrounded by icy-cold water and 4 pillars (only one of them remains now). The folks from the villages believe that the 4 pillars represent the 4 Yugas of the world, viz.,

They believe that the end of Kalyuga will be marked by the disintegration of the 4th and last pillar.

The earlier the water used to be clear and people would take a dip in it. Nowadays it has become polluted, but you can visit this cave and check if it has been cleaned. The dip into the cold water will take away all the fatigue from your trek. 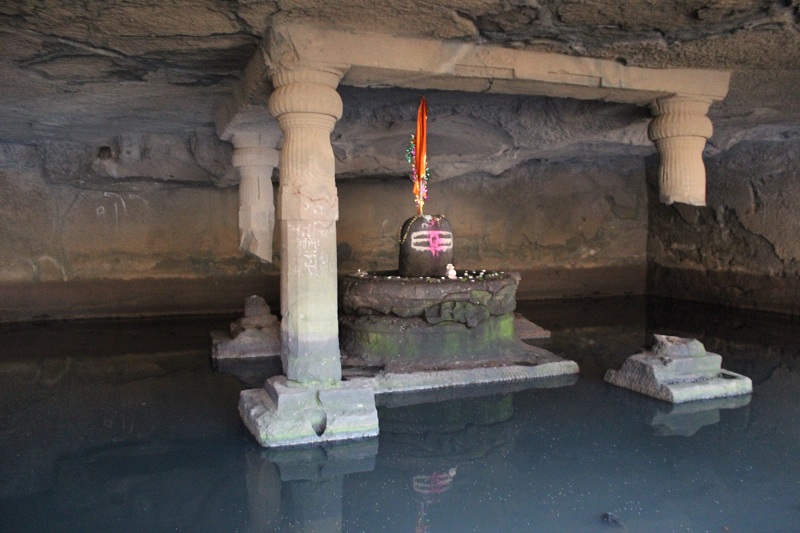 This is the highlight of Harishchandragad trek and a must-visit place for everyone. The sunset at Konkankada is really beautiful and if you get a chance to camp at the meadow near Konkankada, the experience will be awe-inspiring.

This place is also popular for the sighting of brocken spectre (a circular rainbow). 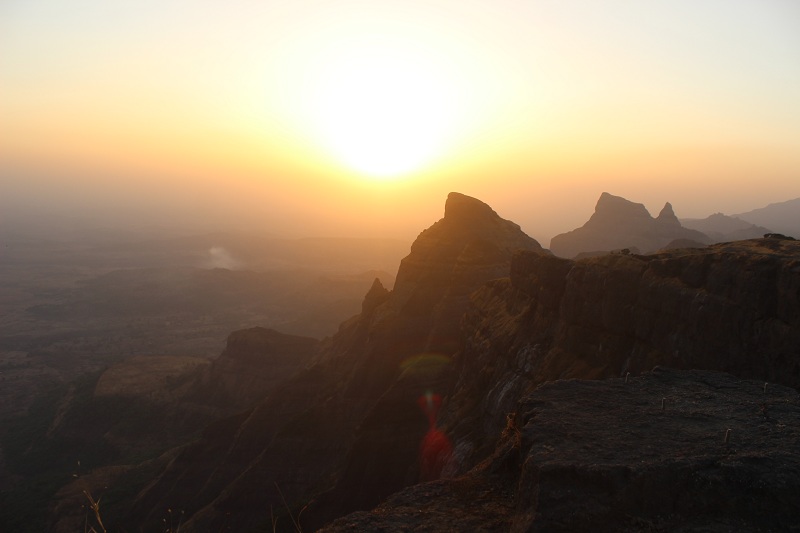 This is the highest point on the Harishchandragad fort and offers views of a lot of surrounding mountains as well as the temple and Konkankada.

This is a small temple-like structure on the east side of the temple. The water in the pond beside this structure is icy-cold, despite being out in the open.

Saptatirtha literally translates to "Seven Waters" in sanskrit. Pushkarni is any deep masonry well with steps going down to the water level. Such wells are especially found near temples of high civilized settlements. It is called a "vav" in Western India and a "baoli" in Northern India. Some were built by kings and were richly ornamented. They often were built by nobility, some being for secular use from which anyone could obtain water.

This Pushkarni is used for ritual cleansing and during rites of consecration (The act of having been made or declared sacred - consecrating water from seven rivers in this case). The water in the tank is deemed to be sacred and capable of healing many maladies. 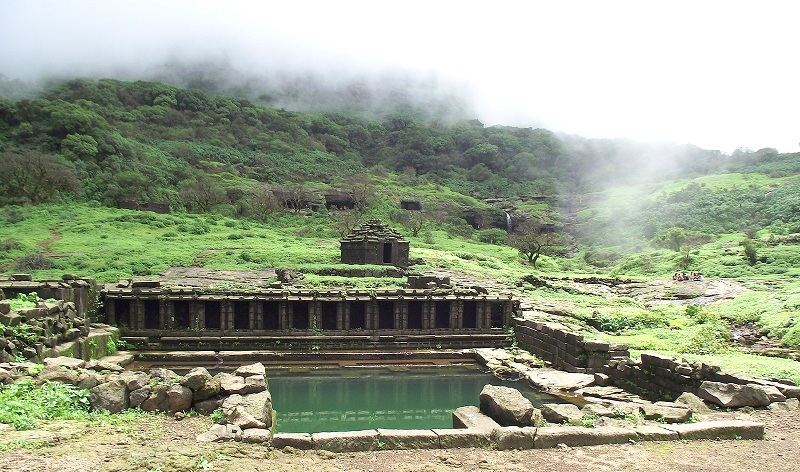 These caves seem to have been carved in the 11th century. These caves are an abode to trekkers and have idols of Ganesha. 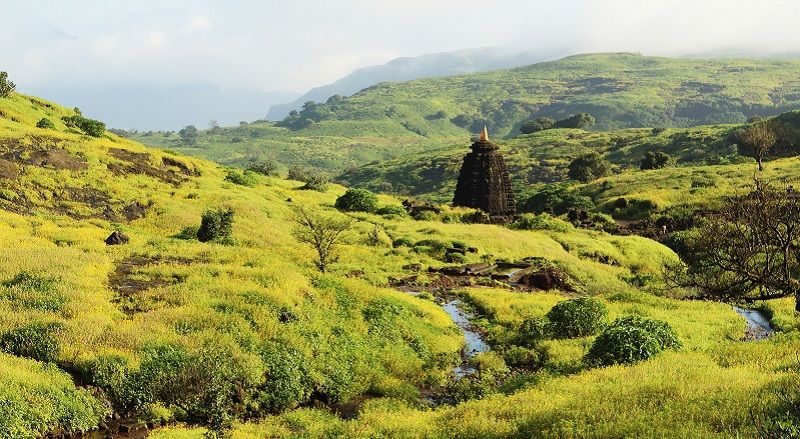 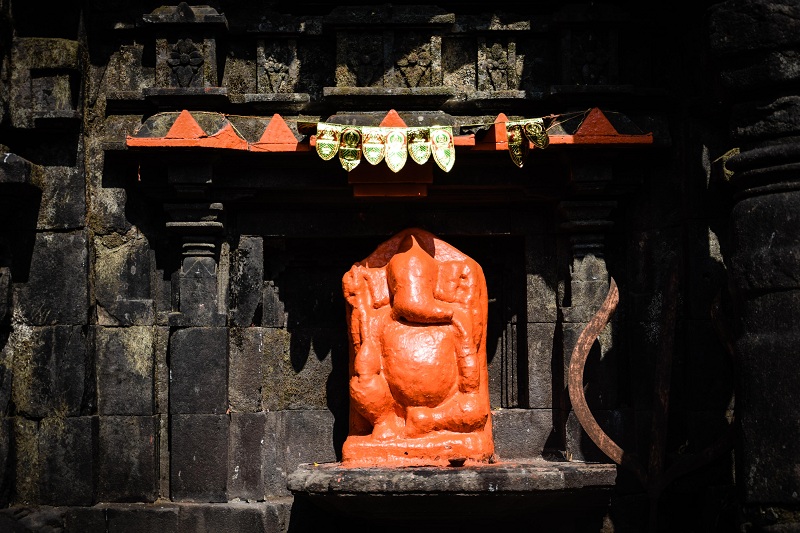 You can also embark upon a night trek (which will be a great option if you want to hike during the summers. Although the hike will be pleasant and cool, ensure that you have someone in your group who is comfortable around the dogs in the village who might start barking. 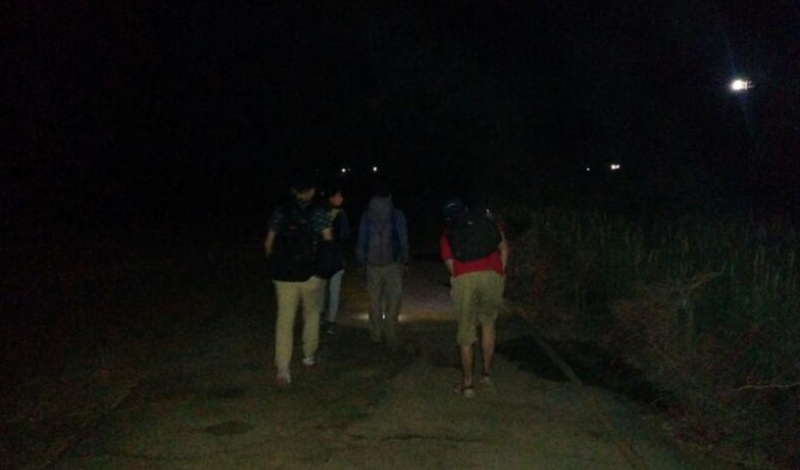 The schedule for the trek can be as follows:

Things to Pack for Harishchandragad Trek

- Warm clothes during winters (Temperature could drop below 10° Celsius)

- Sports shoes or trekking shoes (strictly no sandals or chappals)

- Comfortable trousers (no jeans or shorts)

- Light snacks to munch on during breaks

- Fresh fruits / Dried fruits such as dates, figs / Nuts mix, etc for eating along on the trail

- Personal medications, if any

review us on
See All Reviews
About Author 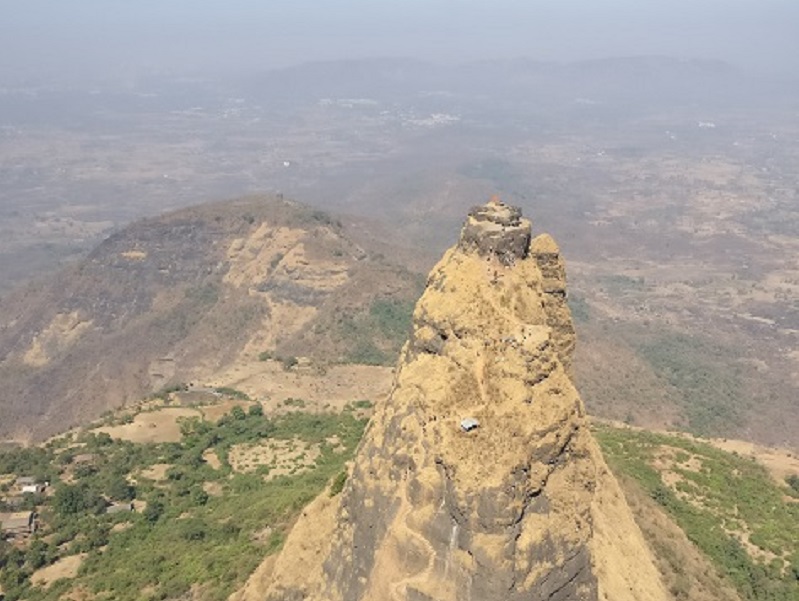 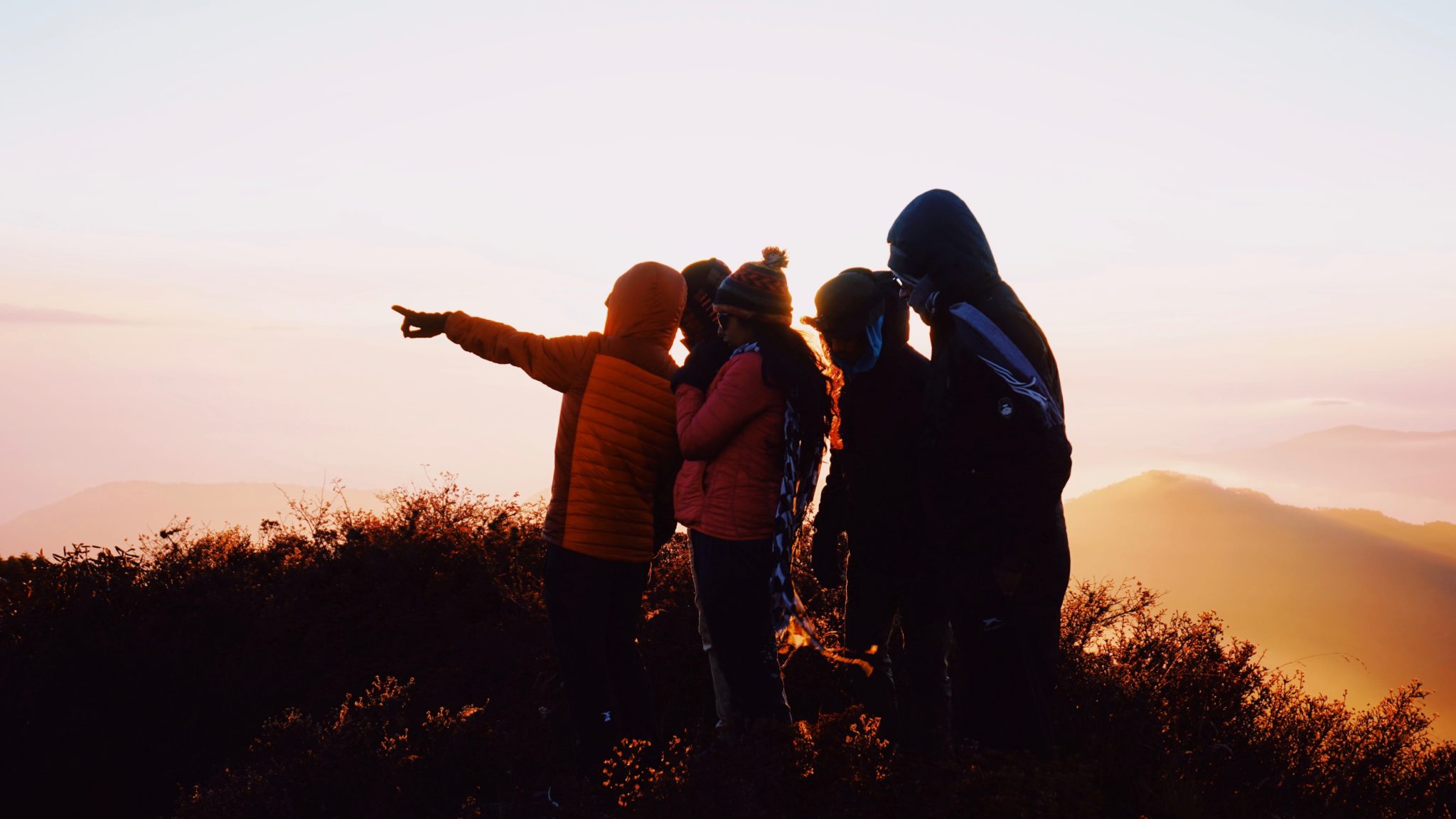 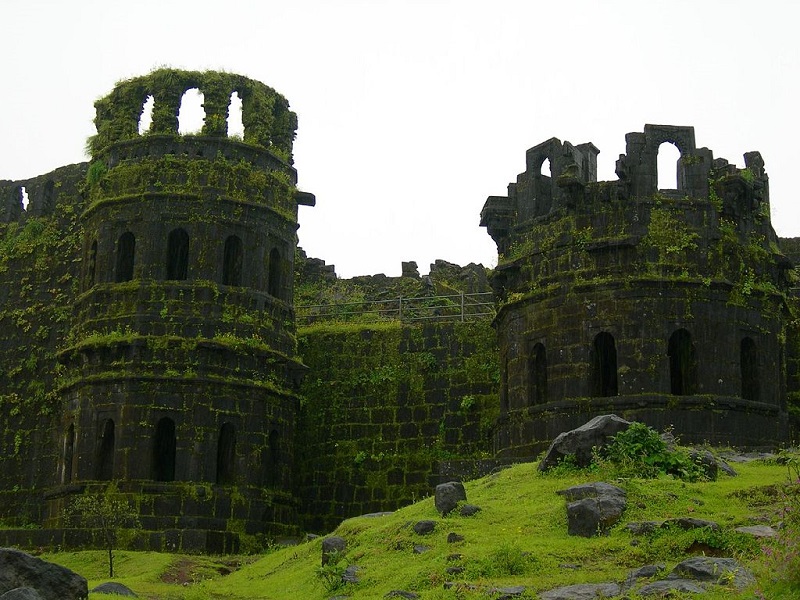 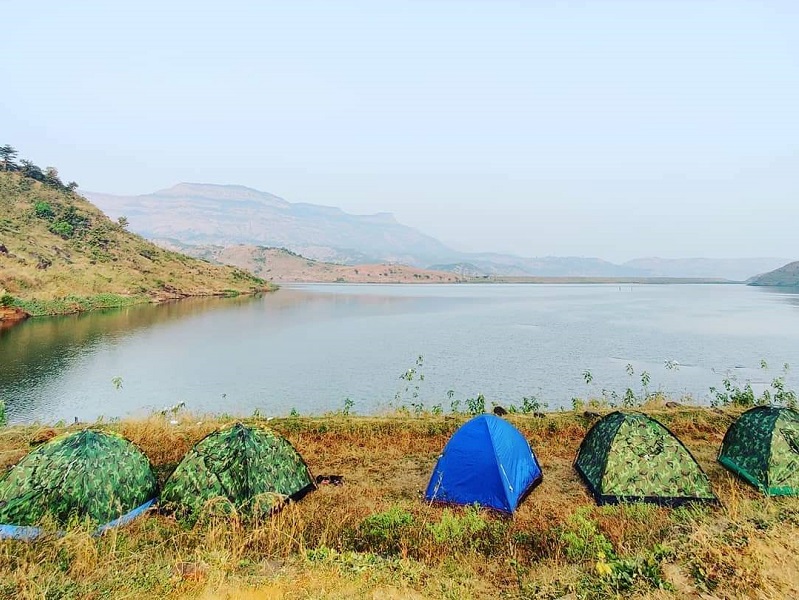